Photo by Rahul Pandit from Pexels

Their knowledge, at least. Each time I read a new book it’s like I’ve downloaded the author’s brain into my own.

I just finished re-reading The War of Art by Steven Pressfield.

I always feel the resistance. I felt it when I woke up this morning. The night before I start a new week I’m confident. I tell myself I’m going to have a great week — that I’ll go 7 out of 7 and complete everything I set out to do each day.

Without fail, I wake up every Monday morning and the resistance is ready to pounce.

I never feel confident to start the day. But I tell myself to do the work and I manage to get through it most of the time.

So far I’ve been able to keep going because I’ve done everything I can to remind myself that long-term thinking is the key to getting what you want.

I’ve even learned there’s (anecdotal) data that shows the power of consistent work when it comes to living the life you want.

The power of the power law

Success isn’t mysterious. It’s mathematical. The more time you spend improving your craft, the higher your chances of having creative breakthroughs. This is due to the power law.

The world’s top artists, entrepreneurs, and leaders know the power of the power law. This is why they persist even when things don’t seem to be going their way. They know that toiling away at their craft will eventually lead to explosive growth.

In the book Zero to One by Peter Thiel, he talks about the importance of the power law when it comes to our lives and careers. He says that instead of “diversifying,” by having a wide range of mediocre skills (i.e. a multiple-page resume with tons of “extracurricular activities”) we should instead focus on one area in order to take advantage of the power law.

If you look at the math, it’s hard to argue against.

When it comes to becoming great at what you do, one plus one equals more than two.

This idea came from a post I read from James Altucher about becoming “one percent better,” each day. According to the power law, if you become one percent better each day at what you do, by the end of the year you’ll be 38 times more skilled. Pretty good!

I took this idea and combined it with the popularized “10,000-hour rule,” which says you reach a higher plane of creativity and skill after 10,000 hours of deliberate practice.

Depending on how much you work per day, achieving 10,000 hours of practice will usually take ten years. I did the math on getting 1% better on a daily basis for ten years according to the power law. It came up with a number so high the calculator couldn’t spell it out.

I wanted to see how many days it would take to increase your skills by a ridiculous yet fathomable number. I chose 1 billion.

It would take you 2083 days, a little bit shy of 6 years, to become one billion times better at what you do. Is this an exact measurement? Of course not. The point is to illustrate the power of focusing on doing the work each day until you reach breakthroughs, which in the span of a lifetime, isn’t all that long. If you put in the work, day in and day out, the person you started out as wouldn’t be able to comprehend the one you’ve become.

All of this sounds good, but actually taking the time to get 1% better each day takes a level of commitment most of us haven’t made or aren’t willing to make.

When I’ve only gotten two hours of sleep because my daughter was up all night the last thing I want to do is get up and write. But moving forward I’ll have to remind myself of the power of showing up and getting better.

I have to fight through “the dip,” to take full advantage of the power law and so do you. The dip is the point where people quit just before they are about to succeed. They’re thinking linearly — that the next step will only increase their skills or chances of success by the same amount as the last step. 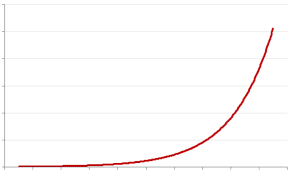 Where are you on the curve?

We’re in a constant battle with the resistance. Every day you get a W or L in the column. You don’t lose if you have self-doubt. You only lose if you fail to show up, do the work, and try to get better.

I write about ways to combat the resistance because I struggle with it every single day of my life. So do each and every one of you. It’s easy to scoff at the idea of mastering your life. It’s easy to complain rather than do. It’s easy to stare down the tunnel of the future and decide the light at the end isn’t worth the work.

I’m no better than you. I’m mainly writing this for myself. I know what I want and I know the resistance is standing in the way. I know my life would be “okay,” or even good without working towards my dreams.

But I don’t want my life to be “just okay.” I think if we’re all honest with ourselves we know that none of us wants that. A life lived without sharing your gifts with the world isn’t much of a life at all in my opinion. The results and outcome don’t matter. But whether or not you shared definitely does.

Your first blog post won’t be very good, but your 1,000th one will be great.

Your first business might fail. But maybe you’ll strike gold on your third.

There’s no way around being a novice.

But one day you’ll be a master.

I’m doing my best to stay on the path to mastering my skills. I’ve only been writing for about a year. The thought of what it requires to become great makes me have second thoughts about trying– almost every day. But I keep going. Why? Because I love it. To know what I want to do with my life and to avoid it is sinful.

Will you join me?

Also Read: Why It Takes 10 Years to Succeed

Find me:
Ayodeji Awosika
Ayodeji is an author on a mission to help people improve their lives by getting them to ask smart questions, experiment, and develop the skills they need to accomplish whatever they want to accomplish.

Personality of the Week: Captain Chris B Kariuki, The Man Who Has Been Flying for 44 Years

To know what I want to do with my life and to avoid it is sinful.

Book A Session with Eric Wanaina